I haven´t listened to Alec Baldwin´s podcast in some time but came across it last week for a very good reason.

When two of my heroes went to a legendary record studio to produce one of my all-time-favorite songs, I started to read and listen and watch all about it. What would be more exciting than Barry Gibb asking Dolly Parton to participate at those country versions of famous "BeeGees" songs (The album "Greenfield" came out earlier this year featuring Nashville greats)?

See for yourself - it is beyond "words.

What touched me even more was to listen to Baldwin celebrating one of our great songwirters and producers who wrote music history together with his brothers as "The Bee Gees", first as serious competitors to other giants like, for instance, "The Beatles", then, more than a decade later, when they invented one phenomena called Disco Sound by writing the soundtrack for the movie "Saturday Night Fever".

Then there were other voices, like the bespoke Dolly Parton or Kenny Rogers he wrote songs for as was the larger than life Barbra Streisand who got back into the charts with Barry Gibb as "Woman In Love".

But you have to stay tuned until when Gibb´s son, Stephen, a musician himself, appears to talk about and to his father - I rarely heard someone as honest and as humble talking about family and talent and, yes, love as those two guys. 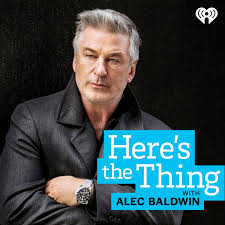 The Bee Gees were Barry Gibb and his younger twin brothers, Robin and Maurice. From the time they started playing together as children, they dreamed of stardom, and they certainly succeeded. The Bee Gees became among the top-selling music groups of all time. The distinctive “blood harmony” of the brothers' voices set the dance floor on fire and their prodigious talent as songwriters extended their career long past disco’s days. Now in his mid-70s, Barry is the sole survivor of the group. Barry talks to Alec about his songwriting, fame, and family. Robin died in 2012 and Maurice in 2003. Barry’s keeping the Bee Gees’ music alive and still making music. HBO recently released a documentary about the group, How Can You Mend a Broken Heart? and Barry put out an album featuring Nashville greats singing Bee Gees songs called Greenfields: The Gibb Brothers Songbook (Vol. 1). Learn more about your ad-choices at https://www.iheartpodcastnetwork.com