Lady Pamela Hicks has something to say. About life and lifestyle, heritage and history, love and loss.

And who better to talk to than your daughter? India Hicks, cousin of Prince Charles as well as bridesmaid at his wedding to Lady Diana Spencer (the girl on the left, smiling into the camera).

As princess Anne was bridesmaid at her mother´s wedding - because Pamela Hicks was the daughter of Lord Mountbattan. A circumstance that made her a "Lady In Waiting " to the Queen later in life sharing lots of her travels and events.

Her daugher India Hicks chose to live overseas in the Bahamas´wonderful Pink Sands island with an extended family - but stays put with her English roots - well aware that the world of her mother will die with her. So she tries to get as many as possible from those marvellous memories, told in that uncomparable way. 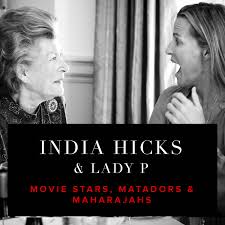 When the future Queen Elizabeth was due to be married to Lady Pamela’s cousin, Philip, Lady Pamela was chosen as a bridesmaid. The wedding of the future Queen was of course a major international event and broadcast on radio to millions around the world. Inside Westminster Abbey were two thousand guests, including seven queens and six kings, and the 18 year old Lady Pamela, busy alongside her fellow bridesmaids dealing with broken tiaras, lost bouquets and much more…

There is also a book you might consider, not new, really, but still enchanting.

If you liked to watch "The Crown" you will realize: This is the real thing.

Lady Pamela describes some of her most intimate moments with the sovereign, reading from never-before-seen journals